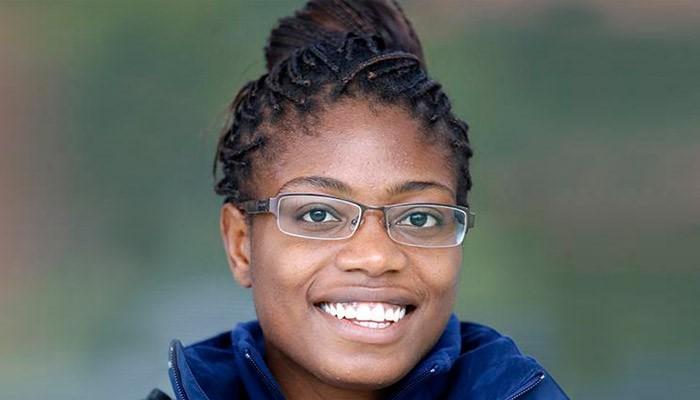 EDMONTON (CIS) – Trinity Western’s Sabrina Nettey (Surrey, B.C.) was named the CIS Female Athlete of the Year (Field) when the season award winners were announced Thursday morning prior to the start of the 2014 CIS indoor track and field championships.

Nettey, a fourth-year psychology student in her second year of eligibility, is undefeated this season against CIS rivals in the long jump and triple jump. She is the top seed in the long jump entering the national meet (6.32m) and ranks fourth in the triple (12.07m).

At the Canada West championships, Nettey prevailed in both those events, while adding a third gold medal in the 60m (7.55 – ranked 2nd in CIS) and also helped the TWU 4x200 relay to a second-place finish. In the long jump, she broke a 21-year-old conference record by 22cm thanks to her leap of 6.32m, which would have also shattered the CIS championship mark of 6.24m set back in 2001. She won the triple jump with a school record of 12.07m.

Nettey is the first Spartans track and field athlete to ever win a CIS award.

“Sabrina’s record-breaking effort in long jump is a testament to her ability to perform when it matters,” said Spartans coach Laurier Primeau. “While the award is for her performances in the field, Sabrina’s further success on the track, in winning the 60m and earning a silver medal with the 4x200m relay team, just goes to show what kind of athletic ability and character she has when competing under pressure.”

The other nominees were Rebecca Haworth of Dalhousie (AUS), Éloïse Rheault of Sherbrooke (RSEQ) and Caroline Ehrhardt of Western (OUA).

The three-day CIS meet runs from Thursday to Saturday at the University of Alberta’s Universiade Pavilion. Selected events will be webcast throughout the championships on www.CIS-SIC.tv.

On the women’s side, the other award winners were Jenna Westaway of the Calgary Dinos (outstanding track event performer), Rebecca Haworth of the Dalhousie Tigers (Student-Athlete Community Service Award) and Guelph’s Katelyn Ayers (rookie of the year).