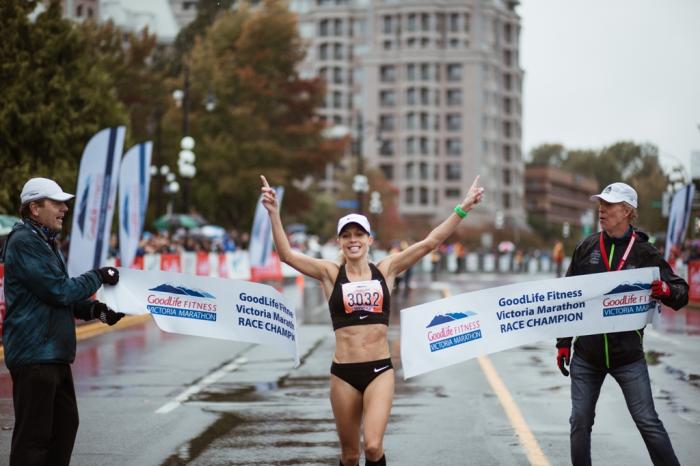 Last week at the 2018 Goodlife Fitness Victoria Marathon over 8000 runners took part across all events on the weekend. The Half Marathon event, was the final event of the BC Super Series and the Provincial Half Marathon Championship.

Only competitive members of BC Athletics were eligible for the Half Marathon Championships, putting just 38 competitors in the running. The men’s event was won by Sean Chester with a time of 1:11:00, second Jerry Ziak 1:11:22 and third Drew Nicholson with a time of 1:14:30.

Natasha Wodak won the women’s distance, setting a new course record of 1:11:45 and placing seventh overall in the race field. Robyn Mildren was second at 1:15:00 and Meg Lewis-Schneider third with 1:15:31.

The Half Marathon also was the twelfth and final event of the BC Super Series, a collection and collaboration of the best running events in BC. Starting in January and running throughout the year, runners earn points until the winners are crowned in October.

In the open women’s category, it came right down to the last race of the season. Rachel Cliff led the Open Women’s division for most of the year with wins at the Harriers Pioneer 8k, Pacific Road Runners ‘First Half’ Half Marathon, 3rd at the Vancouver Sun Run and 2nd at the St. Patrick’s Day 5k. Rachel led Natasha by less than 100 points. Which meant that Natasha would have to run 1:12:38 to catch her, and needing to best 1:14:06 course record set in 2014. Everything came together and was executed perfectly, Natasha ran 1:11:45 improving the course record and leaping her into first place in the series standings over Rachel.

Third was Dayna Pidhoresky, she had a phenomenal spring season with wins at the IceBreaker 8k, Times Colonist 10k and the Scotiabank Vancouver Half Marathon and top 5 finishes at Sun Run and St Patrick’s Day 5k.

The Men’s open division standings saw Rob Watson atop the leaderboard for most of the season, with Rob competing in 7 of the 12 events this year. The Mile 2 Marathon coach won the ‘First Half’ Half Marathon and BMO Vancouver Marathon, placed top 5 at the Sun Run, St Patrick’s Day 5k, IceBreaker 8k, and came second at the Summerfast 10k by a tenth of a second.

Jesse Hooten placed second in the series, running strong early in the season and this being the first year that Jesse has completed four of the BC Super Series events he is in running for Male Rookie of the year. Third place goes to another Mile 2 Marathon coach Tony Tomsich, who improved with every race this year.

Female Rookie of the Year, will go to Danae Dumontet, running six races this year to finish strong at the Under Armour Eastside 10k and cap off the win.

Age Graded winners will be Marilyn Arsenault and Craig Odermatt. Marilyn had a great runs throughout the season but capped it off nicely with a 1:20:40 at the Goodlife Victoria Half Marathon to cinch to the top place, win the age category in the BC Championship and do it by setting a new age category event record. Craig had another strong and consistent year, nearly always the a top Master’s athlete, he completed seven events this season to edge out the runner up.