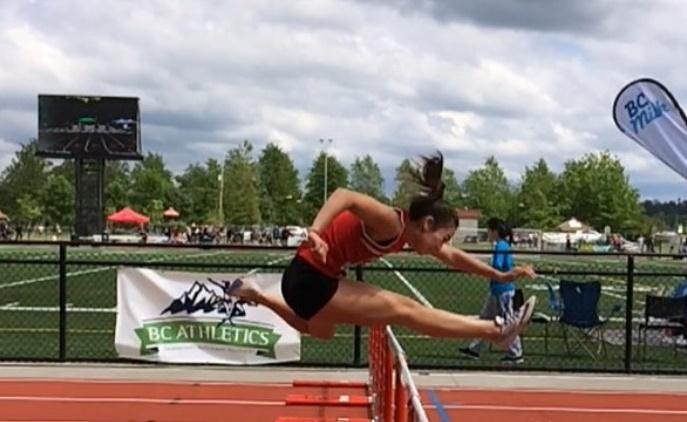 Katarina (Kat) Vlahovic is finishing up grade 11 at Fraser Heights Secondary School in Surrey. Kat competes for Universal Athletics Club and is coached by Jessie Dosanjh. She entered the BC High School Track & Field Championships as the favourite for the 100m Hurdles and came out victorious, with a new personal best over the 33” barriers and a new meet record of 13.97. That same weekend she also placed second in the 200m to her good friend and training partner Jasneet Nijjar in a personal best time 24.85. BC Athletics caught up with Kat after her golden weekend to talk about her performances at the BC High School Track & Field Championships and her goals for the busy season ahead.

BC Athletics: Congratulations on your showing at the 2017 BC High School Track & Field Championships. You achieved a new personal best in the 100m Hurdles at the 33” hurdle height of 13.97 and broke the illusive record set by Connie Polman Tuin of Powell River back in 1981. How did you feel your preparation went for this race? Was the meet record something you had in mind going into the race? What were you thinking when you crossed the finish line?

Kat: Thank you so much! I felt pretty confident with the amount of training that my coach and I have gone through the past month on training for this championship, I wanted to make sure that I was able to come within reach of my goals as well as keeping myself safe. Yes, this meet record was definitely something that I always kept it in the back of my mind as I started my highschool season this year. It had always been one of my personal goals. Once I crossed the finish line I had only hoped that what I had just ran was good enough to break the record, however I was greatly relieved once I saw 13.97 on the screen.

BC Athletics: The former record holder and Olympian, Connie Polman Tuin, was on hand that day and presented you with your medal. What was that experience like for you?

Kat: It was definitely an honourable moment receiving the medal from Connie Polman Tuin, for her to have held that record for so long almost felt as if she was passing down the reins to me. Without a doubt it was one of the biggest highlights of my track career, certainly an experience that I will never forget.

BC Athletics: Your run of 13.97 equals your best time over the 30” hurdles. What does this mean to you as you will run over the 30” hurdles again this year? What areas of your race are you focusing to improve upon as you gear up for the rest of the season?

Kat: Yes! It will surely mean for me to run much faster with 30" hurdles as I keep the Canadian record time of 13.33 in mind. Some aspects where I am specifically focusing on is, getting my hip over the hurdle much faster as well as sustaining my speed throughout all 10 hurdles. I've worked a lot on getting out of the blocks fast and attacking the hurdle at the beginning, however I want to be able to have that same aggression throughout the race.

BC Athletics: Earlier this year you were selected to compete for Team Canada at the Commonwealth Youth Games in Nassau, Bahamas (July 19-23). What are you most excited about to be representing Canada at your first major international competition? What are your goals for this meet?

Kat: I am definitely excited about representing Canada, it has been something that I have never thought to be able to achieve at 17. I'm mainly thrilled to have the opportunity to experience what the competition is like in other countries. As well as have the chance to make my family, coach, club and community proud for what I have been able to accomplish. My goal for the meet is to perform at the highest level I can, and achieve more than just participation.

BC Athletics: Who do you look up to on the hurdling scene and why?

Kat: I can easily say that Kendra Harrison and Sydney McLaughlin are my top two on who I look up to the most. Mainly for how young these two athletes are and how much they've achieved already. Achieving goals and records that athletes much older than them have conquered. I find it inspiring with how they've remained focused on their goals and kept their mentality in the right place by prioritizing what means the most.

BC Athletics wishes Kat the best of luck this season!

Athlete of the Year Awards - Call for Nominations!

BC Athletes at the 2017 Summer Universiade (FISU) Games - Recap

BC Athletes at the 2017 World Track and Field Championships - Recap

Check-list Charlie does it all! Royals' Dannatt takes double gold