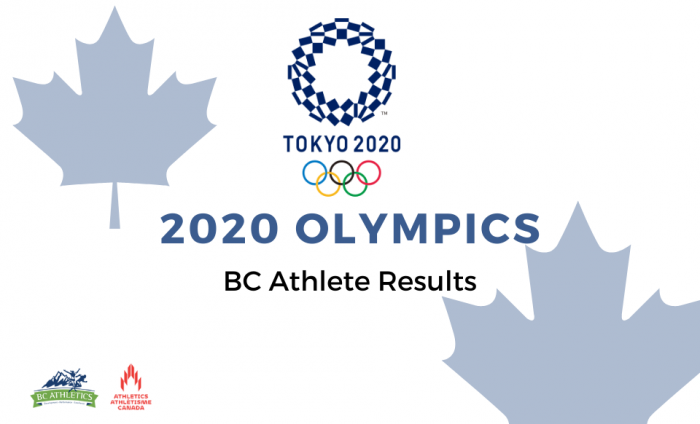 Athletics at the 2020 Tokyo Olympic games took place between July 29th and August 7th. We had 18 athletes from BC representing Canada, with two BC athletes coming home with BRONZE medals! CONGRATULATIONS!  There is much to celebrate! Below are the highlights of their performances.

With a gutsy performance at his 2nd Olympic Games, Evan Dunfee of Race Walk West, coached by Gerry Dragomuir, walked 50km in 3:50:59. With an impressive close over the last kilometre, he steadily moved up the field and crossed the finish line to win a BRONZE medal!

Winning an Olympic medal at his first Olympic Games, Jerome Blake of the Okanagan Athletics Club, ran the 4x100m relay along with Aaron Brown, Brendan Rodney, and Andre De Grasse. They ran 37.62 in Round 1 which placed the 3rd and automatically qualified them for the final, where they ran 37.70 to earn the BRONZE medal.

Camryn Rogers, member of Kajaks Track and Field Club and NCAA athlete at the University of California, Berkely, threw 73.97m for her first throw in qualifying, which automatically sent her to the finals where she threw 74.35m and placed 5th overall. Camryn is coached by Mo Saatara.

In his 4th Olympic Games, Michael Mason of Nanaimo Track & Field Club, coached by Jeff Huntoon, kicked off athletics at the games with the Men’s High Jump. He jumped 2.25m and placed 14th overall.

John Gay of Vancouver Thunderbirds, coached by Chris Johnson, ran 8:16.99 for a 3 second PB in the first round of the Men’s 3000m Steeplechase which placed him 11th in the heats and qualified him for the final. In the final, he ran 8:35.41 and placed 15th overall.

In her first Olympic Games, Lindsey Butterworth of Coastal Track Club, coached by Brit Townsend, ran 2:02.45 in Round 1 of the 800m, which placed her 32nd overall.

In their first Olympic Games, training partners Regan Yee (Langley Mustangs) and Alycia Butterworth (Unattached) both coached by Mark Bomba, ran 9:41.14 and 9:34.25 in the 1st round of the 3000m Steeplechase, respectively.

In her second Olympic Games, Christabel Nettey jumped 6.29m in the long jump qualification round, which placed her 22nd. She is coached by Boo Schexnayder.

In her first Olympic Games, Natalia Hawthorn of the Vancouver Thunderbirds, coached by Chris Johnson, ran 4:08.04 in the Women’s 1500m Round 1, which placed her 31st.

In her 3rd Olympic Games, Liz Gleadle threw 58.19m which placed her 23rd in the qualification round. She trains with the Vancouver Thunderbirds, coached by Laurier Primeau.

Now two-time Olympian, Lucas Bruchet raced in the men’s 5000m.  He ran 13:44.08 in the 1st round, finishing 27th overall.  Luc is a member of Mile 2 Marathon and the BC Endurance Project and is coached by Richard Lee.

In her Olympic debut, Georgia Ellenwood (Langley Mustangs), coached by Gregory Portnoy, tackled the 7 events of the heptathlon, finishing with a score of 6077 points, placing 20th overall.

In her second Olympic Games, and first in the marathon, Malindi Elmore, battled through the heat and humidity of Sapporo to finish 9th overall in the womens marathon.  Her result was the best Olympic marathon finish by a Canadian woman in a non-boycott Games.  Malindi is coached by her husband Graham Hood.

This is Natasha Wodak’s second Olympic Games and first in the marathon. In the very hot conditions of Sapporo, Natasha finished in 13th.  Natasha is a member of the Praire Inn Harriers Racing Team, and is coached by Lynn Kanuka.

This was Dayna Pidhoresky first Olympic Games and she preserved through very tough conditions and circumstances to finish the marathon in 73rd place, staying the course while many others did not finish. Dayna is coached by Josh Seifarth.

In his Olympic debut, Ben Preisner of Mile 2 Marathon and the BC Endurance Project, Ben was the top Canadian male finisher in the marathon, placing 46th. Ben is coached by Richard Lee.

For full results and access to replays visit: https://www.cbc.ca/sports/olympics/summer/schedule-results

Athletes excel at the 2021 BC Event Group Challenges

Liam Stanley Stands on Top of the World