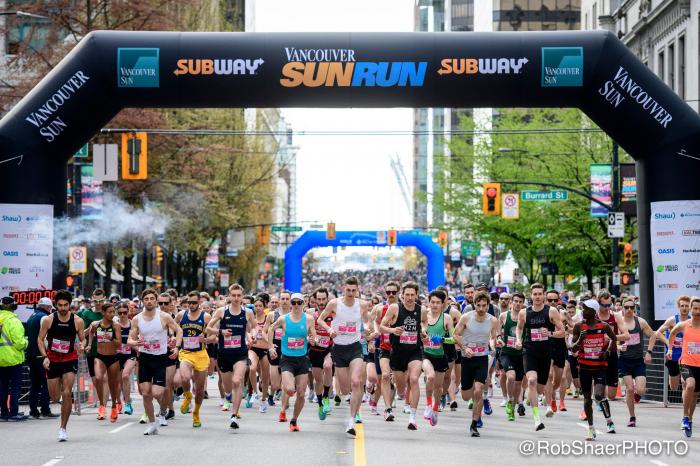 The spring and early summer of 2022 belonged to the roads, with over 41,000 runners taking to the streets in April, May, and June alone. With the spring big three - the Vancouver Sun Run, TC10k and the BMO Vancouver Marathon - seeing great numbers return, road events are back in full force!

We also saw three BC Athletics Road Running Championships take place in that time, at the 5k, 10k and Half Marathon distances, with great performances coming from each.

First up in the Championships were the 10k, hosted by our friends at the Vancouver Sun Run, which saw a number of competitive BC Athletics members take part. Leslie Sexton decidedly led the women’s event from start to finish. Not only taking both the win and the BC Championship, she finished 30 seconds over the second place overall runner and two minutes ahead of the next BC runner. Joining her on the BC Championships podium for the women were Lindsay Carson and Katrina Allison.

​The mens’ race was led by training partners Luc Bruchet, Ben Preisner, and Justin Kent, who worked as a team to hold off the other contenders and take the podium spots in the above order. The trio finished about 10 seconds apart, with each getting under 29:00 and Luc just 1 second shy of the 28:30 bonus.

Next up in the Championship Series was the Longest Day 5k, a race that is as well known for its fast field as it’s fantastic post race BBQ. Hosted by the Vancouver Thunderbirds at UBC on June 17, Luc Bruchet took the race pace out fast and pulled the top three runners each to a sub 15:00 time, and was the overall and BC Athletics Champion in 14:41.  Alexander Gladley and Brendan Wong battled it out for second place, finishing just one second apart with 14:54 and 14:55 respectively to also be recognized as Championship and overall race medalists.

The women’s race saw Laura Yantha bring home the win and the Championship with a 17:38, with competitive BC Athletics members Lissa Zimmer and Alicia Kelahear coming in second and third in the Championship race.

Wrapping up the spring season, the Vancouver Half Marathon took place on June 26, with a new route, new finishing area and the hottest day that we had to date all year.  The race started early up at UBC where the runners appreciated the shade, before dropping into Spanish Banks for the cool breeze on their backs. The runners that may have been in the later stages of the race, definitely felt the heat as the sunshine warmed the pavement and the humidity increased. But the deceptively rolling course, with the net downhill, didn’t disappoint with great feedback being received about the new course. With the Vancouver Half Marathon also known for its charity partner support, it was exciting to see over 40 charities taking part in the charity challenge, raising over $600,000.

Continuing her strong performances in her racing career renaissance, Jen Millar of Victoria took home the women’s Gold in the Championship with a time of 1:18:53, followed by Corri Longridge and Rozlyn Boutin in the hot muggy conditions.

Ben Preisner won the Men’s division, with 1:05.49. As part of his final marathon prep leading into this weekend’s World Championships, the hot conditions served him well as hot temperatures are anticipated during the Championships. Brendan Wong continued to build his presence on the road scene, placing second and scoring his third Championship podium this year, following his win at the 8K Championships, third at the 5K Championships, as well as competing at the National 10k Championships in May. Unable to best Brendan this week, Alexander Gladley finished in third.

For more on the race story, see the article on Canadian Running Magazine.

Wrapping up our 2022 Road Championships is the marathon, being hosted by the Royal Victoria Marathon on October 9, 2022.

Followed by the BC Athletics Cross Country Championships on October 22, 2022.

All of the BC Road Championships are part of the BC Super Series, a collection of the best road races in BC. All participants in each of the races collects points, based on their performance, on their way to the year end awards. Current leaders in the series are:

The Longest Day 5k and the Vancouver Half Marathon, are part of the Lower Mainland Race Series, with races taking place from April to October.

To find a club near you visit our club finder and contact the club directly for information about coaching and programs.