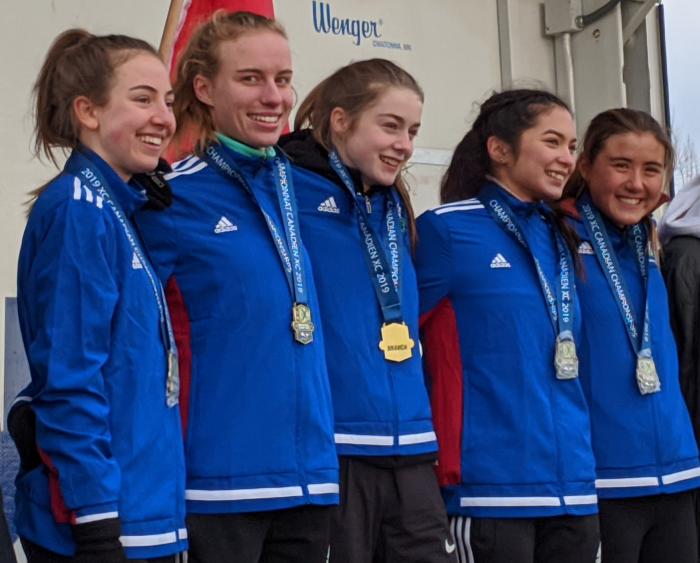 The masters team was able to bring home the Canadian Masters Athletics GATT Trophy for the best 4 masters by age graded scoring, last won by BC in 2013, scoring for the GATT were David Guss, Graham Cocksedge, Neil Holm and Jen Millar. In the individual results, BC women placed 2, 3, 4, with Jen Millar, Robyn Poulin and Kerry McKelvie also running for the BC Team. BC men swept the podium with Aaron Holmgren (3), Graham Cocksedge (2) and Andrew Russell taking the win, both Aaron and Andrew representing the BC Team. Other runners scoring for the BC Teams were Jill Delane (14) and Corinne Issel. For the Men, Craig Odermatt (11) and Dave Cressman (15) both placing very well in their age categories.

U16 had Christina Peet Williams of Chilliwack T&F placing second on the Women’s side and on the Men's Tion McLeish (Victoria Speed Project) and Devon Meadows (Coquitlam Cheetahs) placing 1, 2 respectively.

U18 Men saw Jaiveer Tiwana of Coastal Track Club take home the gold in a solid run from start to finish and the BC Team finishing second with Jeremiah Mackie (12), Jacob Wadhwani (13), Gage Zanette (16), Keaton Heisterman (25) and Dylan Uhrich (31).

U18 Women swept the podium with three runners solidly leading the pack throughout the race. Running together as a pack until the final 400m when Madelyn Bonikowsky of the Kootenay Chaos, pushed the pace on Kendra Lewis (2) of Vancouver Olympic and Maya Kobylanksi (3) of Ocean Athletic. With their BC Teammates solid runs of Delaney Chan (10) and Emmajean Neal (20) the women’s BC Team walloped the other provinces. Katelyn Stewart-Barnett caught a virus on Friday and was unable to compete.

The U20 Men’s race saw runners from Ontario and Quebec take it out hard from the start and the BC Men had worked had to find an opportunity to reel runners in on the back half of the event. The top BC runner was Jaxon Mackie (10) running with Gonzaga University this year. Scoring for the BC Team, which took bronze, were Jack Boden (13), Aiden Miller (16), Riley Miller (19), Gabe Van Hezewijk (27), Joshua Woolgar (29) and Jonah Brost (41).

The senior men was a fast race with the frozen course still running in firm conditions with very little mud late in the day. The race ran pretty close with a large pack of runners together until the final lap when it started to thin out. Three runners of Luc Bruchet (Mile2Marathon), Connor Black (ONT) and Mike Tate (ONT) were out together when they went behind the hill on the course, trading the lead amongst them. When they emerged over the hill, Mike Tate had made his move, Luc worked to stay with him and looked like he would in the final stretch but ended up placing second, and Conner Black taking third. In the Club competition Vancouver Thunderbirds placed second, Mile2Marathon fourth, University of Victoria fifth and the Langley Mustang men placed seventh.

Scoring for the Senior Men's BC Team were Braeden Charlton (12), Nick Colyn (19), Thomas Broatch (30), Joel De Schiffart (40) and Brandon Vail (50). Chris Taylor needing to pull out of the event part way due to injury.

Senior women saw three runners take it out hard and after the first lap build a lead on the remainder of the field. Defending champion Genevieve Lalonde (NB) broke away after the hill on course and kept the lead to the finish over second place Sarah Inglis (BC-Langley Mustangs) and third Maria Bernard-Galea (AB). Natasha Wodak (PIH) placed fourth and Regan Yee showed off her final straight kick to overtake Victoria Coates in the final home stretch for fifth. The Langley Mustangs were able to take the Club title scoring just 28. The Senior Women’s BC Team also took first for the Province with Sarah Inglis (2), Lindsay Carson (10), Ally Ginther (11), Sandra Kilmartin (14), Joanna Williams (19) and Madelyn Brunt (29).

Thank you to the Local Organizing Committee for organizing a great event.

In the U20 and Senior events, the top six eligible runners qualified for spots on the Athletics Canada National Team that will represent the nation at the Pan Am Cross Country Cup taking place February 29th in Victoria, BC. A number of BC athletes have been offered positions on the team and we wait with anticipation to see which will accept their spots on the team.

Full results can be found online at - https://athletics.ca/championnat/2019-canadian-cross-country-championships/

For more stories on the event and athlete interviews, please visit –

BC Cross Country Champions and Teams Crowned in Abbotsford

Kris Swanson takes win #19 of 20 at the EMPEROR'S CHALLENGE

Save Up To 25% Off Performance Testing At Fortius Sport & Health

BC to be well represented at Pan American Cross Country Cup