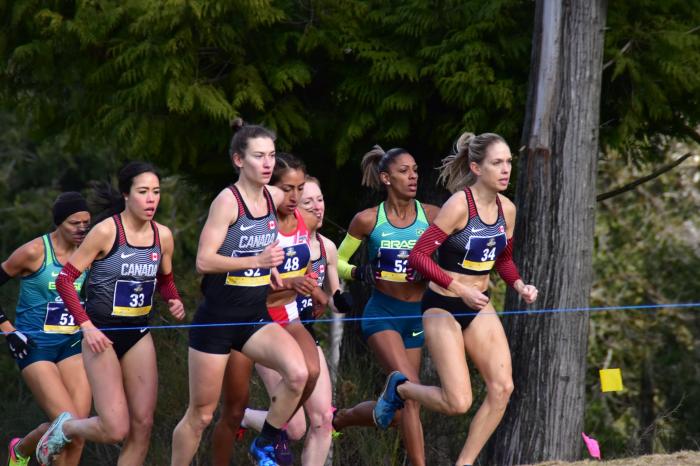 Cool but sunny temperatures greeted the Pan Am athletes at Bear Mountain Resort Langford Saturday for the 2020 Pan Am Cross Country Cup. It was a full day of racing with a community race, youth races and the Can Am Masters Challenge.

The U20 women was the first of the Pan Am races with 30 runners from Canada, USA, Mexico, Peru, Brazil, Panama and Colombia. The 6km course was won by Brooke Rauber from the USA in 23:12, Canada’s top junior Sadie Sigfstead was second in 23:23 and third was Peru’s Jhenifer Melchor in 23:46.

The U20 men’s field had 32 runners running 8k (4 x two km laps). From the start it was a tight lead pack with Corey Georges and Evan Bishop from the USA and Alejandro Alania from Peru jostling for the lead. During the second lap the lead kept changing with Mexico’s Cesar Daniel Gomez Ponce taking second place. In the final lap Georges pulled away to win in 27:15, Bishop was second (27:20) and Alania third in 27:27.

Georges ran a tactical race. “I tried to play it smart as I knew there were four laps, so I held back and made a move in the last two kilometres,” he said. “It is an amazing experience running here and an honour to run for my country.”

The senior women’s race was dominated by two-time Canadian Cross Country champion Geneviève Lalonde. She took the lead from the start with teammate Natasha Wodak close behind her with Peruvian Lizaida Thalia Valdivia and USA’s Carrie Verdon also in the pack. Lalonde extended her lead and with two kilometres to go it was clear she would win easily. She hit the tape in 37:37. Verdon was second in 38:09 and Valdivia was third in 38:12. Wodak came fourth in 38:24.

Lalonde, who now lives in Victoria, was bubbling with delight at her victory. “I wasn’t planning on taking the lead so early but kept it smooth and the gap kept growing,” she said. “There were such great crowds today particularly on the hills and they raised the momentum.” She found the course hard: “It was particularly challenging on the back end with the twists and turns but it wasn’t as hard as the Worlds last year in Aarhus, but it was tough for sure.”

The men’s race proved to be a nail biter with Team USA and Brazil battling it out for a podium. Anthony Rotich from the USA took the lead and in the second lap Daniel Ferreira DoNascim made a challenge. It was a tactical move with teammate Johnatas De Oliveira Cruz also moving ahead. By the fourth lap Americans Dillon Maggard and David Goodman were in contention. On the last lap Rotich and De Oliveira Cruz were neck and neck and on the home straight had a photo finish, both recording 32:50 but the Brazilian was announced the winner by a fraction of a second. Paul Ramirez from Peru was third in 33:11. Top Canadian was Connor Black finishing fifth in 33:25. De Oliveira Cruz explained afterwards it was all teamwork. “We ran as a team until the third lap and I had to decide do I stay with Daniel or pull away. So I decided to push harder.” The team prior to the race studied the course and ran on similar terrain at home to simulate the course. The 29-year-old ran the World Cross Country Championships at Aarhus, Denmark last year. “That was a tipping point for me – I decided to train hard for this event,” he said.

The day also saw exciting action in the other races. Canada took on the USA in the Can Am Challenge where the Canadians had a 18-14 lead and was undefeated on Canadian soil. Canada didn’t disappoint with a sweep in both the men’s and women’s races. Graham Cocksedge from the University of Victoria Track Club had a commanding lead in the 5K with Mark Cryderman from Campbell River, Vancouver Island, closing in over the last lap. Cocksedge was able to keep the lead to finish in 18:24 with Cryderman a few seconds behind in 18:32. Third was Brian Torrance in 18:42.

Jen Millar led from the start of the women’s race. The road race runner from Victoria is transitioning to trail and enjoyed the course. “Such a beautiful course with the tough up hills and fast downhills - you couldn’t catch your breath.” Millar hit the tape in 20:34 with Lauren King second in 21:29 Andrea Smith third in 21:47.

The Pacific Northwest Youth Cup featured the best high school runners in the region. The boy’s race was won by Victoria’s Jonah Brost in 18:13 with Joseph Curtis from Coquitlam, second in 18:17 and third was Jaiveer Tiwana from Surrey in 18:30. Ella Madsen from Coquitlam won the girls race in 19:23, second was Christina Peet Williams (Team Dogwood) in 19:48 and third was Ella Ballard (Victoria) in 19:56. The boy’s division was won by Victoria and the girl’s by Vancouver with Surrey winning the overall championship.

The day kicked off with the Community Race over 5K. Over 40 runners from BC clubs lined up to test the course ahead of the main races. Ian Searle from the Prairie Inn Harriers led the pack until Jonathan Behnke passed him with one kilometre to go to take the tape in 18:06. Searle came second in 18:29 and Matthew Galea from U of C Athletics Club was third in 19:14.

Behnke, from the Vancouver Falcons, recently won the Cedar 12K and is gearing up over the next few months for the cross country season in the fall. Asked about his prep for the race he said he did look at the map and ran some of it the day before. “I had no idea of the field, so I started fast and waited to see who came with me.”

The women’s race was won by Vancouver’s Ally Ginther in 20:51, second was Sarah Brian (Prairie Inn Harriers) in 23:59 and third was Stephanie Croft in 27:04.

The VIRA Cup for the top team was won by the Prairie Inn Harriers.

The Nations Cup saw over 175 kids from 22 schools run a 1.6km loop. Students from grades K – 2, 3 – 5 and 6 – 8 started in waves with each school having been designated a Pan Am country running in the country’s team colours.

“After almost a year and a half of planning and preparing, the races came together perfectly,” says Bruce Deacon, the event General Manager. “We again showed the world that the Victoria running community is second to none in putting on world class events.”

The Pan Am Cup is in conjunction with the NACAC (North American, Central American and Caribbean Athletics Association) Cross Country Championships. The inaugural event was in 2005 and held in Florida. In 2015 the Pan Am Cross Country Cup was added to the event. In the NACAC Championships on Saturday Canada won the U20 Female and Senior Female titles and USA the U20 Male and Senior Male titles.

For full results in all races go to: https://panamxccup2020.com/news/results/

You can find the broadcast of the event - click here.

UPDATED - A number of interviews with the winners and organizers are now posted on Athletics Illustrated - https://athleticsillustrated.com/category/2020-pan-am-xc-cup/

Canada’s Lalonde, Wodak, Black and Sigfstead on the podium at the 2020 Pan American XC Cup

There couldn’t have been better conditions on Saturday in Victoria, BC, for the 2020 Pan American Cross Country Cup as the host team Canada gave it their all and it showed on the podium.

The senior women’s 10-kilometre competition gave the Canadian contingent something to celebrate. Genevieve Lalonde earned Canada’s first win of the day as the Canadian trio of Lalonde, Wodak, and Bernard-Galea stuck to the front of the pack early on and didn’t let up.

In the end, it was Lalonde standing atop the podium as the Pan American and NACAC gold medallist with a time of 37:37. She would be joined by Natasha Wodak (38:24) on the NACAC podium and Victoria Coates (38:43) in 7th place.

Taking the lead and not looking back even once, Lalonde says she felt comfortable throughout the race and it showed in her run today.

“This is a good start to the 2020 season and looking to the lead up to the Olympic Games,” said Lalonde. “Going up the hill, I kept my rhythm and keeping it smooth and I took it out more than I expected. We’re here to inspire you so we’re going to keep running, keep racing.“

With files from Pan Am XC Cup and Athletics Canada.

The BC Cross Country Championships are coming up on October 23rd! Are you ready to run?

Fall Season on the fields, trails and roads!