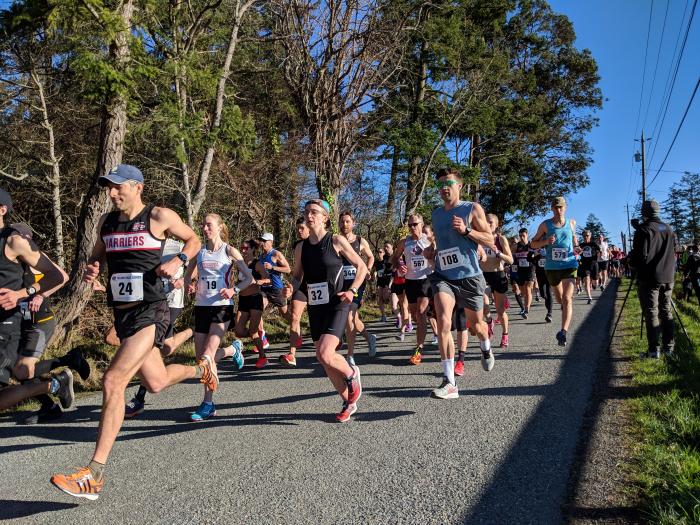 It was a glorious day in Victoria on Sunday for the first race in the Vancouver Island Race Series and the BC Super Series – the Harriers Pioneer 8K. The 40th annual event – hosted by the Prairie Inn Harriers – saw 536 compete under sunny, spring like conditions. Vancouver’s Anthony Tomsich was the overall winner with Natasha Wodak winning the women’s race.

Tomsich, was a first-time participant and was the clear leader winning in 24:44. He had been prepping for the race by doing workouts with his club, Mile2Marathon run club.  “I have been putting in some base mileage, so it was nice to come out and enjoy the beautiful weather that we had today.” Second was Christopher Taylor, also from Vancouver in 25:05, and third was Victoria’s Andrew Russell in 25:24.

The highly anticipated duel between Wodak, the Canadian 8k record holder, and Rachel Cliff, defending Pioneer champion and the Canadian Half Marathon record holder, did not disappoint with the two virtually neck and neck throughout the race. Wodak, who has won Pioneer six times, triumphed to win the women’s race in 26:04. This was also a F35-39 age class record. Next weekend she will be running the Houston Half Marathon. “The previous two years at Pioneer I ran around 26:37. I did the same thing last year, ran Pioneer, then the Houston Half Marathon, and I ran 1:11:31 in Houston. So, running a little faster here, I hope to run a little faster in Houston too.”

For results and to read more on the Pioneer 8k, visit - http://www.bcathletics.org/BCSuperSeries/news.php?_id=69

The Steveston Icebreaker 8k hosted by the Kajaks Track & Field Club is next up in the BC Super Series and first event in the Lower Mainland Road Race Series. Online registration is open until Friday for the Sunday January 20th event.

The Icebreaker 8k is also the BC Athletics 8k 2019 Provincial Championship, reminder to everyone to make sure they have renewed their membership in advance of the event.