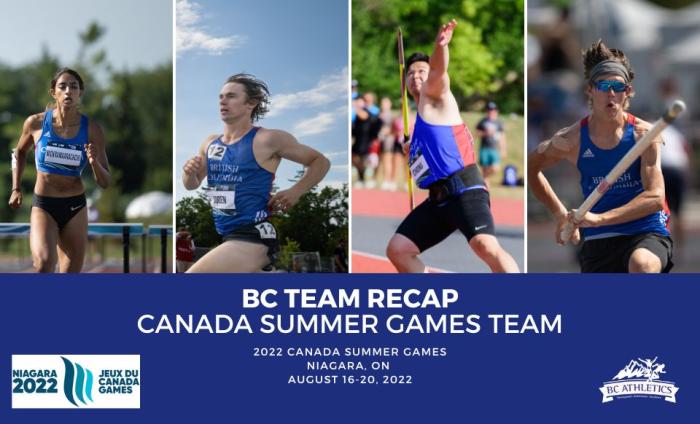 From August 16th-20th, the best Canadian Track and Field athletes gathered in Niagara, Ontario to compete at the 2022 Canada Summer Games.

As part of the BC Team program, along with Special Olympics and BC Wheelchair Sports we were excited to name 58 athletes and 9 Team Staff to the BC Canada Summer Games Team. This team excelled in their events, taking home 22 TOTAL medals; 4 GOLD medals, 6 SILVER medals, 12 BRONZE medals, 64 TOP 10 performances, 8 PERSONAL BEST performances, and 1 Championship Record. Congratulations athletes!

Here are some of the performance highlights! A full results recap can be found here.

In the sprints, Leo Sammarelli (Wheelchair Race Series Society) took gold, silver, and bronze medals home in the 1500m WC, 400m WC, and 100m WC. Katherine Lucas (Unattached BC) took home silver in the 100m. In the relays Team BC dominated and took home a silver in the men’s 4x100m, as well as a bronze in the women’s 4x400m. Finally, in the Jessie Thibeault took home a pair of bronze medals in the Special Olympics 100m and Special Olympics 200m.

In the field, Noel Vanderzee (Kajak’s Track & Field Club), took home gold in the Men’s High Jump with a jump of 2.12m.  In both the Men’s and Female Pole Vault, a pair of bronze medals were brough home, by Isaac Clements (Athletics Victoria Track and Field Society) and Ella Foster (Royal City Track and Field Club).  Ryan Denman (Unattached BC) and Trinity Hansma (Vernon Amateur Athletics Association) won a pair of bronze medals as well in Long Jump and High Jump respectively.

BC throwers dominated in the hammer circle! Chanell Botsis (Kajak’s Track & Field Club) threw to a gold medal, achieving a Championship Record. Tasha Willing (Unattached BC) threw to a pair of silver medals in Hammer Throw as well as Shot Put. Royal City’s Track & Field Club, Jarrett Chong threw to a bronze medal in the Javelin. Finally in the throws, Dolly Gabri (Unattached BC) threw a 44.52 in the Discus which landed her a bronze medal.