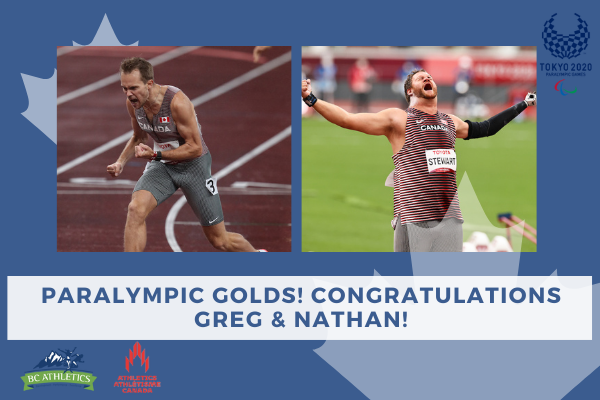 BC Athletics is extremely proud of its four Paralympic athletes who competed in Tokyo. Making it to the Paralympics is a feat in itself and the performances they gave were extraordinary.

Two-time Paralympian Liam Stanley set a new T37 Paralympic record with a time of 4:06.95 in the T38 1500m, but just missed the podium.  Liam’s teammate, Nathan Riech, also set a new Paralympic record in the same race for the T38 class and took home the Gold Medal with a dominating performance and time of 3:58.92.

Thomas Normandeau, competing in his first Paralympics, finished with a time of 50.02 in the men’s T45 400 metres which was good enough for sixth place.

Greg Stewart, our final BC Athletics Athlete to compete in Tokyo, came out with a massive Paralympic record throw of 16.75 metres in the men’s F46 shot put final to take home the Gold Medal.

We also want to congratulate the BC Athletics Staff members that were in Tokyo: