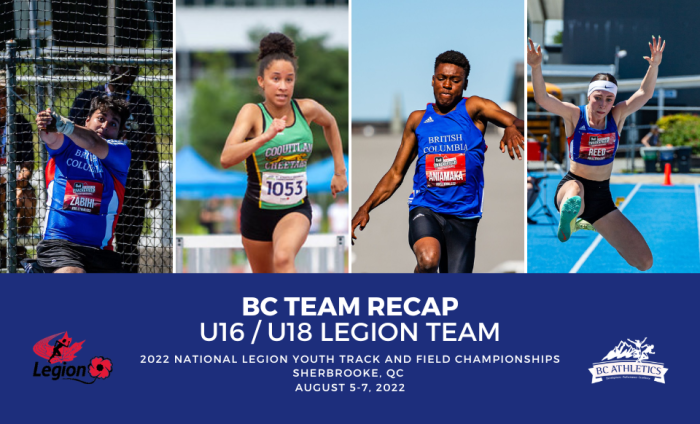 As part of the BC Team program, we were excited to name 40 athletes and 8 Team Staff to the BC Legion Team. This team excelled in their events, taking home 43 TOTAL medals; 20 GOLD medals, 16 SILVER medals, 7 BRONZE medals, 62 TOP 10 performances, 17 PERSONAL BEST performances, and 4 Championship Record. Congratulations athletes!

Here are some of the performance highlights!  A full results recap can be found here.

In the U18 Heptathlon, Madison Gordon (Langley Mustangs) set a new personal best and was crowned National Champion with a score of 4398 points. Aidan Turner (Kajaks Track and Field Club) took the silver medal after 10 events with a score of 6213 points, while setting two new Championship records in the Decathlon Pole Vault, 100m, Long Jump, and Discus.

In the middle-distance events, Langley Mustangs athlete, Noah Louwerse dominated the U16 Men’s 800m and 1200m, winning a gold medal in both events. Bernardo Sada (Ocean Athletics) and Samuel May (Valley Royals Track & Field Club) went 1st and 2nd in the U16 1500m Steeplechase.  Kamloops Track and Field Club athlete, Raiya Matonovich ran a personal best performance in the U16 women’s 800m with a time of 2:13.24.

Yemane Mulugeta (Ocean Athletics) ran to gold in the U18 men’s 2000m SC and silver in the men’s 3000m. Hudson Irvine (Coastal Track Club) won the U18 men's 800m.  Leading the U18 women in the middle-distance events was Maella Hodgson (Ocean Athletics Track & Field Club) who set a Championship Record in the U18 Women’s 1500m and a 2nd place performance in the women’s 3000m.  Maya Baechler ran to a bronze medal in the U18 women’s 800m. In the U18 women’s 2000m SC, Mackenzie Hack set a new personal best of 7:00.03, which landed her in the silver medal position.