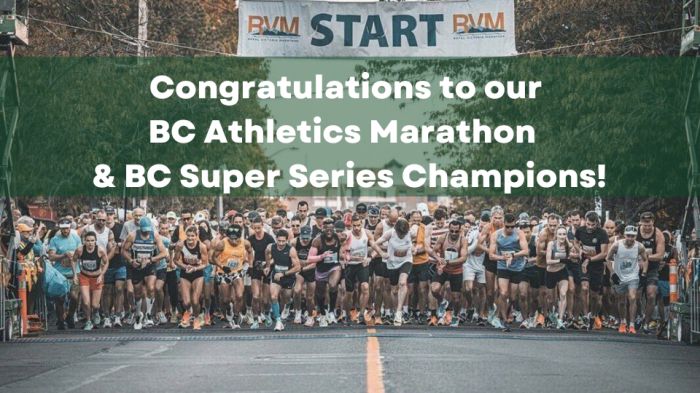 What wonderful weather for Road Running this fall season. Some might have even said it was a little warm on the weekend for the Royal Victoria Marathon, that was host to the BC Athletics Marathon Road Running Championships as part of their fabulous event. Almost 7,700 runners were registered for the events on Sunday, over the Marathon, Half Marathon, 8k and Kids Run 1.5km distances.

Congratulations to Teferi Kebede Balcha and Rozlyn Boutin, who were both the event winners and our BC Athletics Champions!

More on Athletics Illustrated, including interviews with the top athletes from the Royal Victoria Marathon.

Write up from Canadian Running Magazine can be found here.

The BC Athletics Marathon Championships winners over all are:

Not only was the Royal Victoria Marathon the last of the 2022 Road Running Championships, it marked the last event in the 2022 BC Super Series. A collaboration of the best runs in BC and BC Athletics, bringing together the best 12 events in BC with the top athletes in our province.

On the Men’s side of the podium, Lucas Bruchet was able to hang on for top spot, with just 13 points separating the top 3 runners of Lucas, Benjamin Preisner and Justin Kent. At many of the events you would find the three of sharing the spots on the podium. Close behind was Brendan Wong, who had raced 7 of the 12 events this year and won 3 of them outright.

In the Women’s division, top honours go to Leslie Sexton, with two wins and two podiums in her four Super Series appearances this year.

Second place goes to Katrina Allison with one event win and three top ten finishes. Jen Millar of Victoria taking third, with dominating runs on Vancouver Island and podiums in the Vancouver Half and TC10k. Fourth was Andrea Lee, using her placing in the Marathon Championships to propel her into the prize money for the Super Series.

Our top age graded masters of 2023 were Walter Downey and Patricia Kearney. And our top youth runners this year were Cole Wheeler and Ria Gill.

Congratulations to all the runners that took part in any of the 12 BC Super Series events this year!

To win prizing in the BC Super Series, you must also be a member of BC Athletics.

The 2023 BC Super Series Calendar is

All dates are tentative, and you should check with the individual events for updates.