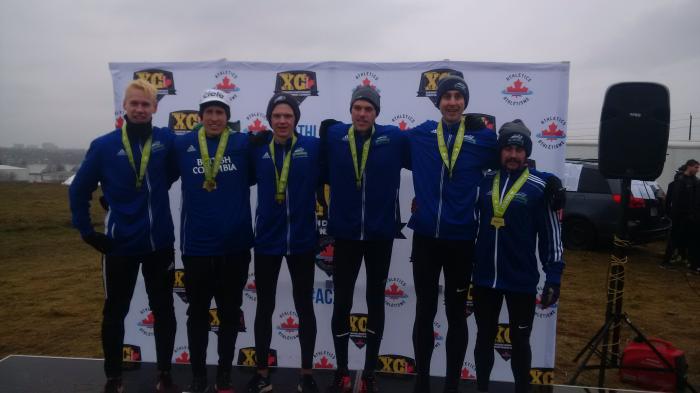 This past weekend in Kingston, Ontario, a team of 44 athletes represented British Columbia at the National Cross Country Championships. The athletes didn’t disappoint, bringing home 15 medals to dominate the National Championship.

The Masters athletes were able to start the day on a dry hard packed course, conditions wouldn’t last long before the course became muddy and slippery as the day ticked along. David Guss (Kelowna Running Club) in the 55-59 Category, was able to snag a silver medal in his age category, but placed 1st overall in the age-graded rankings of all Masters athletes.  Also picking up bronze age category medals were Craig Odermatt (Prairie Inn Harriers) and Tyler Ginther (Coastal Track Club). Masters counted towards a mixed gender team and placed 2nd overall for the Canadian Masters Association GAAT Trophy.

Next up in the cold and now wet conditions were the U18-Youth Women. Kendra Lewis (Vancouver Olympic Club) and Ceili McCabe (Vancouver Olympic Club) took the lead quick and ran with a small pack for most of the race. It came down to the wire, with Kendra out leaning an Alberta runner, to win by .6 seconds. Ceili hung on for third to claim the bronze medal. The two podium positions were enough to secure the team top spot as the Provincial Team Champions.

U18-Youth Men took to the course next in a huge field of 243 runners that made the course tight and the start flurry of elbows and kicks. The men got held up in the crowd and were not able to work their way to the front. The team placed 4th in the Provincial Team category.

Now the rain had started and the wind was gusting over 70km/hr for the U20-Junior Women, the top four BC Women placing in the thirties (31, 32, 37, 38) was enough to place 2nd overall in the Provincial Team Championship.

U20-Junior Men’s race ran as a large group until about 6k, when a small pack decided to breakaway. Eventually coming down to three runners in the last 500m, when Tyler Dozzi (Vancouver Thunderbirds) shifted gears and took the lead, outkicking the two Ontario runners to claim the gold medal. With BC Teammate, Nathan Gaucher (Coquitlam Cheetahs), placing in the top 10, the team secured top spot to win Gold in the Provincial Team Championship.

The course was now becoming quite slippery and conditions saw top contenders out of the running early in the race. Natasha Wodak (Prairie Inn Harriers) with a small group of women quickly separated from the pack. Natasha placed second, with five of six athletes placing in the top 10 and the sixth less than a minute back in 19th, the BC Women dominated the event and won Gold in the Provincial Team Championship. Natalia Hawthorn (Vancouver Thunderbirds) placed fifth, Lindsay Carson (Langley Mustangs) 8th, Sarah Inglis (Langley Mustangs) 9th and Lisa Brooking (unattached) 10th.

The Luc Bruchet (Vancouver Thunderbirds) course of how to run cross country, started at 2:45pm. The course now muddy all the way around. Luc lead from start to finish, with a 13 second lead over the second place runner. Fellow Vancouver Thunderbird, John Gay, ran with the pack to crack the top ten and place 8th overall. Four Vancouver Thunderbirds, Luc, John, Theo Hunt (15) and Braeden Charleton (27) scored as a club team to take Gold in the Club Competition. BC Team members Cam Proceviat (unattached) and Nick Colyn (Coastal Track Club) rounded out the group in 18th and 25th to take the Gold in the Provincial Team Championship.

The 2019-2020 BC Provincial Cross Country Championships will be hosted by the Prairie Inn Harriers at Beaver Lake outside Victoria on October 24, 2019.

If we missed your result, please let us know and we will update the list. Clifton.cunningham@bcathletics.org