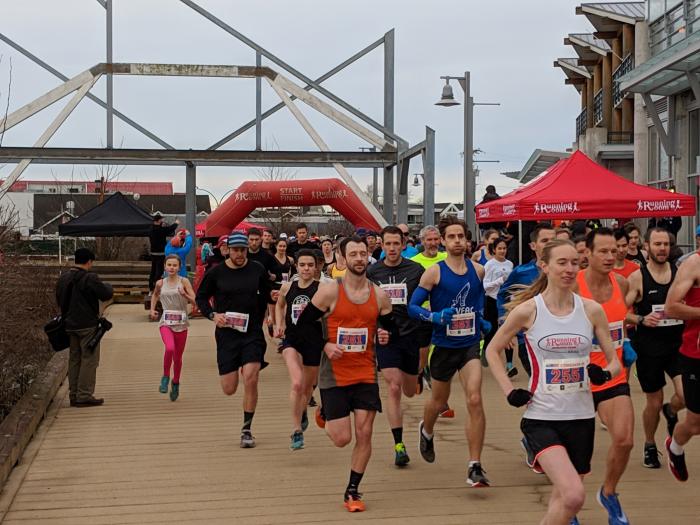 The Steveston Icebreaker 8k was the first event in the Lower Mainland Road Running Series, second in the BC Super Series and also served as the BC Athletics Provincial 8k Road Championship.

For the 371 finishers, the weather couldn’t have cooperated more for the January race, that marks the kick off of the Road Running season in the lower mainland.

Kevin Coffey came out victorious on Sunday, winning the event with a 24:36 and earning the early season Championship belt. Close behind in second place was fellow Mile2Marathon runner Tony Tomsich, coming off his victory last weekend at the Pioneer 8k, with a 24:46.  Rounding out the medals with 25:15 was Max Trummer.

With a time of 29:08 and winning the woman’s championship, Andrea Lee of the Fraser Street Run Club sealed the victory. Second place Jen Moroz finished in 29:24 after her 3rd place finish last week at Pioneer 8k. Third place went to Emma Chadsey of Vancouver with a time of 30:16 from the Vancouver Falcons Athletic Club.

In the Masters 40+ event Kevin O’Conner, of the Vancouver Falcons Athletic Club, took the Men’s victory with 27:25. On the women’s Jillian Fong won with 30:22 placing fourth overall in the women’s field.

Full results can be found at - https://www.startlinetiming.com/en/races/2019/ice

The Championship was open to any Junior, Senior, Masters or Road & Trail member of BC Athletics as of the day of the event.